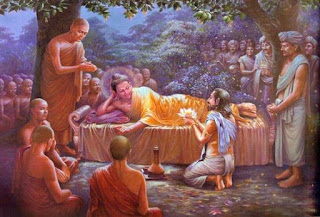 One day Buddha was in an assembly when a man walked in looking furious. He thought Buddha was doing something wrong. He was drawing a huge crowd and people would just go to him and meditate. He was a restless businessman, and he had found that his children were spending their time with Buddha when they could have engaged themselves in business,  making more money and ensuring their livelihood. He felt that spending four hours of their day seated next to someone whose eyes were always closed was a complete waste of time.

So the father of that family was very upset and he said: ” I am going to teach this man a lesson !”  with anger in his heart he walked confidently up to Buddha. As soon as he approached Buddha, all of his thoughts disappeared but the anger in him did not dissipate. He was shaking and he found himself speechless. Since he was unable to express his emotions in words, he simply spat Buddha’s face Buddha, in return, simply smiled. His disciples who were sitting with him were furious. They wanted to react and were ready to jump but the Buddha presence didn’t allow them to do so. They just couldn’t believe someone could behave in such away. They just couldn’t believe someone could behave in such a reprehensible manner with the Buddha.
But they couldn’t say anything. And this man could not stay longer either. He noticed his action had not drawn any reaction from the people around him and Buddha had simpler in return. A few minutes later, He thought, ” If I stay longer I will burst I will explode” so he walked away. Once he returned home, He couldn’t erase the image of the smiling Buddha from his mind. For the first time in his life, he had met someone who had such an extraordinary reaction to such a disrespectful act. He could not sleep all night and his whole body underwent a transformation. He was shivering, shaking. He felt as though his world had collapsed.
So the next day he got up, and went and fell at Buddha’s feet and said: “Please forgive me, I did not know what I was doing”. To which Buddha replied, “I can not excuse you!” Everyone, in sliding Buddha’s disples, was shocked at this reaction. All his life, Buddha has been so compassionate. He had accepted everyone in his ashram. regardless of their past. And now he was telling this businessman that he could not excuse his behavior. Buddha looked around and found everyone to be in a state of shock. So he explained, ” why should I excuse you when you have not done anything? ” what wrong have you done that I should excuse your behavior?”
The businessman replied: “Yesterday, I came to this assembly and in my anger, I spat on your face. I’m the same person. It’s me !”Buddha Said, “That person is not anymore. If I ever meet the person on whom you spat, I’ll tell him to excuse you. For me, to the person who’s right here in this moment, you are wonderful. You have done nothing wrong.”