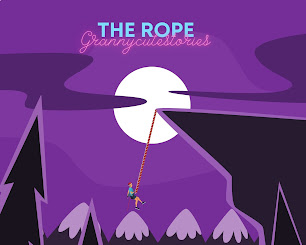 The night fell heavy in the heights of the mountains and the man could not see anything. Everything was black. Zero visibility, and the moon and the stars were covered by the clouds. As he was climbing only a few feet away from the top of the mountain, he slipped and fell into the air, falling at great speed. He could only see black spots as he went down, and the terrible sensation of being sucked by gravity.

He kept falling, and in the moments of great fear, it came to his mind all the good and bad episodes of his life. He was thinking now about how close death was getting when all of a sudden he felt the rope tied to his waist pull him very hard. His body was hanging in the air.

Only the rope was holding him and in that moment of stillness he had no other choice other to scream: “Help me, God.” All of a sudden a deep voice coming from the sky answered,

“Do you really think I can save you?”

“Of course I believe You can.”

“Then cut the rope tied to your waist.”

There was a moment of silence and the man decided to hold on to the rope with all his strength. The rescue team tells that the next day a climber was found dead and frozen, his body hanging from a rope. His hands holding tight to it. Only one foot away from the ground. And We? How attached we are to our rope will we let go??? Don’t ever doubt the words of God. We should never say that He has forgotten us or abandoned us.