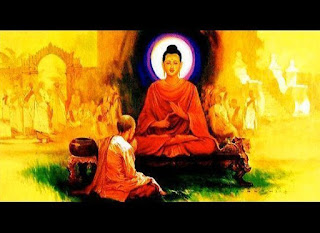 One day in the early morning Gautama Buddha was sitting in a garden quietly with his disciples. A man arrived silently and stood in the shadows, that man was a great devotee of Lord Rama. He had built many temples across the country, he had devoted many years in the service of Lord Rama. He would always chant Rama’s name and contemplate on Rama’s greatness. He was old and close to his last years. Even after many years of dedicated spiritual effort, he was not realized.

He wanted to know for sure if there is a God or not? When he heard about the realized one (Buddha), he came to get his doubt cleared. When he felt nobody would notice him talking to Siddartha, the Buddha. He asked Gautama “O enlightened one, Please tell me the truth! and the truth only. Is there a god?”.

Buddha, from his intuition, knew that man to be a great devotee of Lord Rama, he looked at that man with seriousness and said “No, My friend. There is no God”.

Buddha’s disciples that were gathered there were very relieved and joyous to finally know the truth that there was no god. They all started muttering between them, sharing what the Buddha had just told. Whenever a disciple had asked that question to Buddha he would become silent. So they never knew. His words spread through the whole town, the whole town was celebrating the day on which the truth of NO GOD was revealed by the enlightened. They were finally free of the ideas of hell, heaven, and of somebody sitting up to judge one’s actions.

It was getting late in the evening, and once again the disciples came back and sat around the Buddha.

There was a materialist who had been an atheist all his life, he had convinced 1000s of people that there was no god, he used to go to the priests and scholars and defeat them in the argument about God.

He too was getting old and little suspicion arose in him, “what if there is God? isn’t it a waste of my life to spreading the “NO GOD” message if there is God?” he thought. He was eaten by this doubt, he finally decided to know the truth and seek the enlightened one.

He slowly came up to where Buddha was sitting and asked him “They say you are enlightened, Please tell me if there is GOD?”.

Buddha knowing that man to be an atheist said with a firm voice as if he is in firm conviction “Yes, there is God”. Buddha’s disciples once again we’re back to confusion.

Moral: Believe that there is God or belief that there is no God are both equally useless, one has to realize the truth in himself with diligent self-effort. Enlightened one had told each of them what they had to know in order for them to get stronger on their spiritual quest.