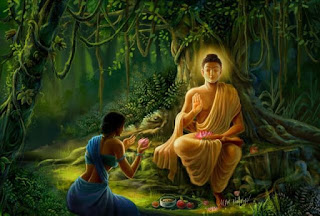 Kisa Gautami was a young woman from a wealthy family who was happily married to an important merchant. When her only son was one-year-old, he fell ill and died suddenly. Kisa Gautami was struck with grief, she could not bear the death of her only child. Weeping and groaning, she took her dead baby in her arms and went from house to house begging all the people in the town for the news of a way to bring her son back to life.

Of course, nobody could help her but Kisa Gautami would not give up. Finally, she came across a Buddhist who advised her to go and see the Buddha himself.

When she carried the dead child to the Buddha and told Him her sad story, He listened with patience and compassion, and then said to her, “Kisa Gautami, there is only one way to solve your problem. Go and find me four or five mustard seeds from any family in which there has never been a death.”

Kisa Gautami was filled with hope and set off straight away to find such a household. But very soon she discovered that every family she visited had experienced the death of one person or another. At last, she understood what the Buddha had wanted her to find out for herself — that suffering is a part of life, and death comes to us all. Once Kisa Guatami accepted the fact that death is inevitable, she could stop her grieving. She took the child’s body away and later returned to the Buddha to become one of His followers.